HW Book Reviews on “Juggling – From Antiquity to the Middle Ages”

I love the circus! The acrobats, the feats of daredevils, and hilarious clowns, but what I love most are those who can juggle. When I was much younger, I could juggle (a little) but always wanted to be the flame juggler or to be able to juggle with bowling pins or swords. It truly is an art.

Wall’s book begins in ancient Egypt, the Beni Hasan tomb no. 15 to be exact. Okay, I have to admit, this section was interesting, but a little boring. Yes, seeing the cool pictures and illustrations were interesting, the truth is, we don’t know what they meant. Wall even mentions that, which begs the question of starting there.

It is in the next section that his journey picks up – Ancient Rome. The Romans loved entertainment and travelling jugglers ventured as far East as China. Less is known about jugglers in Ancient Greece, but hey, with those pesky Spartans stealing the limelight, I will cut Wall some slack over the small section.

Sections on Europe and British Isles are the largest, but those regions also have the most written history of juggling, although Wall’s preference for literature over official documents may be partially to blame for the differences in size.

Some interesting tidbits of juggling through the Middle Ages:
– In Babylon and Assyria, jugglers were included in religious ceremonies and paid in barley.
– In China, some jugglers were actually slaves bought from Persia and the Roman Empire.
– In Japan, juggling is passed down in families through the generations.
– In the 1500s, it was illegal to be a juggler in Europe and the British Isles.
– Dislike of jugglers in the British Isles dates back to the 1000s.

This is a fantastic read for anyone who likes odd history, juggling, circus history, and odd social history. 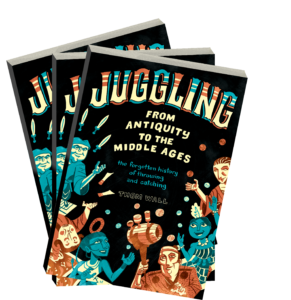 Margot Meandry – “Juggling – From Antiquity to the Middle...

Thom on Ice
Scroll to top