This March, I was lucky enough to be called by the casting director of Radio City Music Hall’s latest production, the New York Spring Spectacular. They were looking to add some flair to the show, and one of the folks they wanted was a juggler. I fit their needs, so I put some projects on hold and moved to New York the next day. (If you’re reading this and considering relocating to New York City on 24 hour’s notice… just know that it’s a stressful thing to do!)

I’d never been to Radio City Music Hall before, and I was floored when I walked into the showroom. 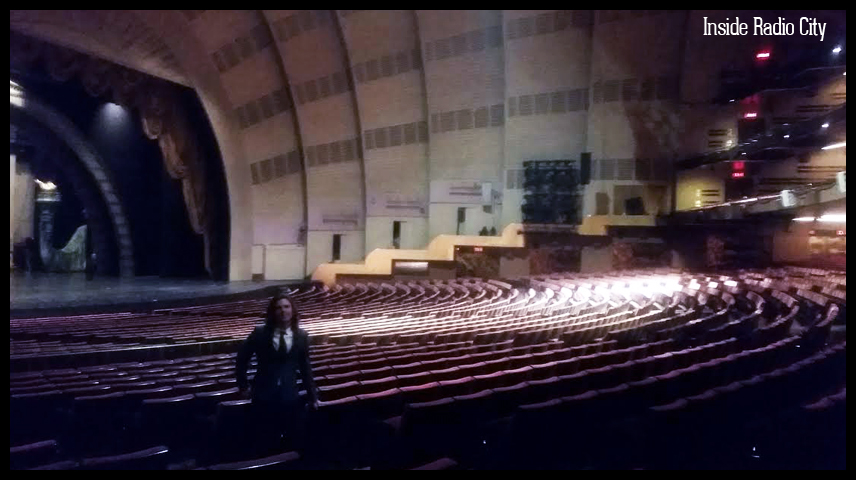 Inside Radio City Music Hall on my last day.

For those of you who don’t know, Radio City is the largest indoor theater in the world. It was built in 1932 and seats 6,000 people. The stage and bandcar are actually a 10,000 square foot system of three separate elevators that have a range of several stories. The design of Radio City’s hydraulic lifts was quickly coopted for the very first aircraft carriers – that’s how unique and revolutionary the design was when it was first concieved. It was place on the American Society of Mechanical Engineers’ list of historic landmarks in 1971. When the theater was renovated in 1999, a crew of engineers looked at the system of original hydraulics and engineering and decided they were “…so sound, they didn’t have to change a thing.” 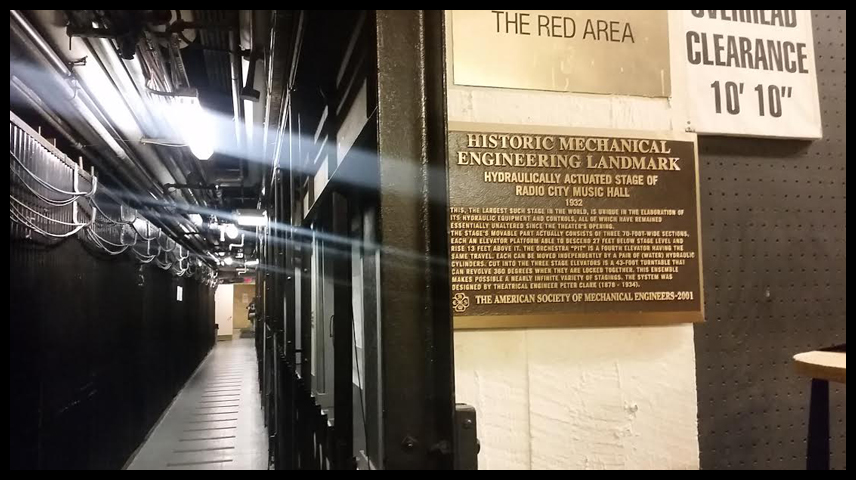 The lobby’s interior was designed by Donald Deskey, a guy who had experience designing the interiors of luxury cruise ships. The main lobby (or “Grand Foyer,” as their PR team calls it) is 60 feet tall and covered in gold-leafed wallpaper. Other parts of the building are lined with marble or covered in murals (including, apparently, an unfinished work by Georgia O’Keefe.)
Despite its opulance, it was slated to be demolished in 1978 due to dwindling audiences. A group of preservationists in New York saved it from becoming a parking lot (really!) Later that year, the theater’s lobby was added to New York’s registry of historic landmarks. 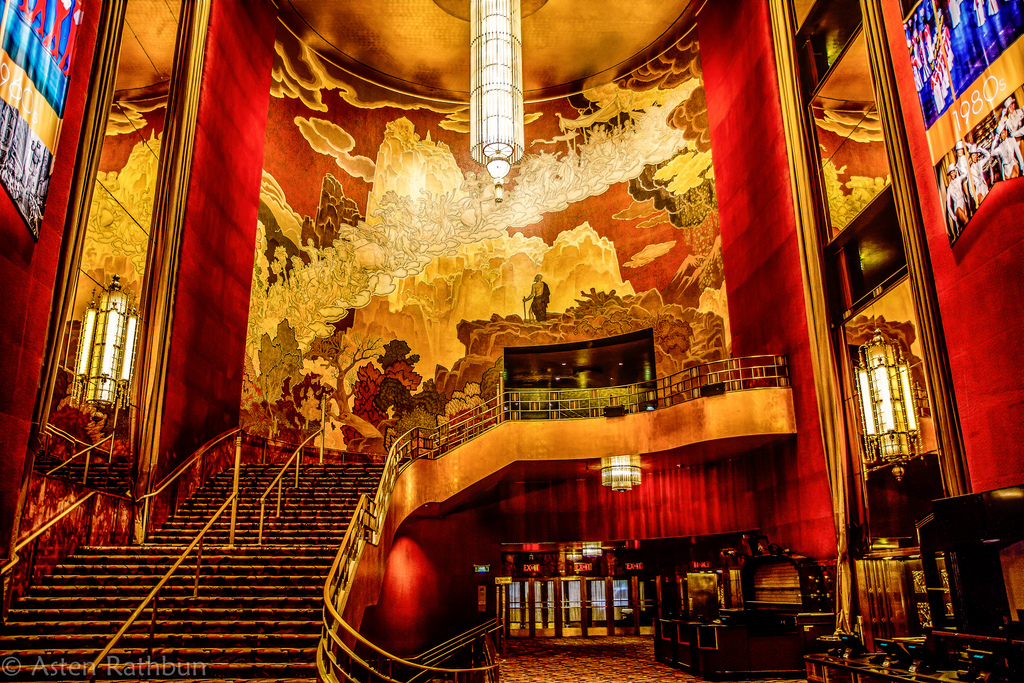 On my first day, during orientation, I asked about safety features. The “bridge” on the Cirque du Soleil show “Totem” had a number of laser curtains and pressure sensors that would stop the machine if it detected a performer’s hand or foot in a danger zone. The stage at Radio City has no such system in place (“It’ll shear your toes right off,” reported the stage manager who gave me my orientation tour.) During shows, the stage crew sets up cordons preventing performers from getting near the stage as its elevators raise and lower for set changes.

(There’s more about the lift system on ASME’s website.)

The areas surrounding the stage are incredible, too.  And impossible to navigate when you’re new.  The Spring Spectacular was staged in such a way that crossing the stage between cues wasn’t possible.  If you left the stage on one side, but needed to go on from the other side for your next scene, you had to either run down to the basement and cross underneath the stage, or run up to the 9th floor and cross above.  Radio City’s backstage is a series of drab corridors and staircases.  Despite tons of signage, if you’re not familiar, you’ll probably get lost.  (…which I did.  And ended up trapped in a stairwell.  In my underwear.  With a bunch of Rockettes.  But that’s a different story for a different day.) 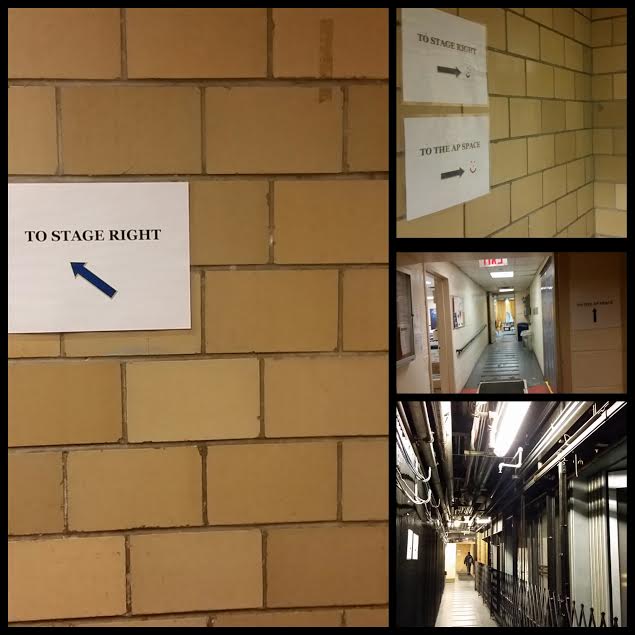 A selection of backstage signage. 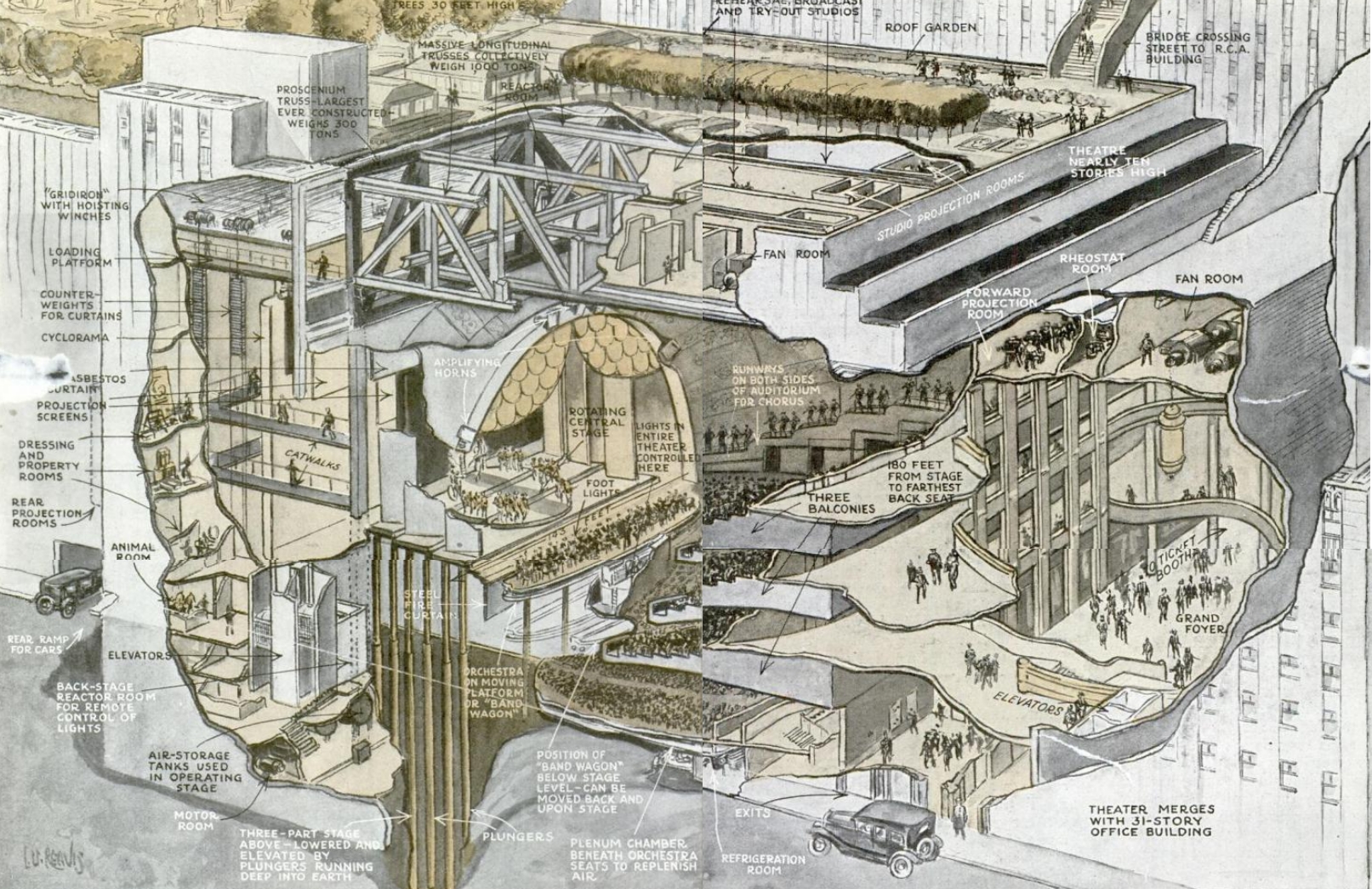 The Spring Spectacular was the natural extension of the Rockette’s Christmas Spectacular, an annual show running in the hall for some 80 years. The Spring Spectacular was 7 years and $120,000,000 in the making. It almost opened last year, but due to a series of issues it didn’t quite make it off the launchpad. The wait was worth it, though – the show was mindblowing. Don’t take my word for it, check out the trailer.

As you can see, the show incorporates a lot of elements – singing, dancing, Derek Hough, tap dancing in the rain, three-story-tall puppets of the Statue of Liberty, talking lions, smoke, lasers, and all sorts.  Not shown in the video, though, are the t-shirt cannons, celebrity cameos, popcorn vendors running down the aisles, giant LED walls, fire-eating, or quick-changes.  You’ll just have to search on YouTube for clips of the show to catch all of that. 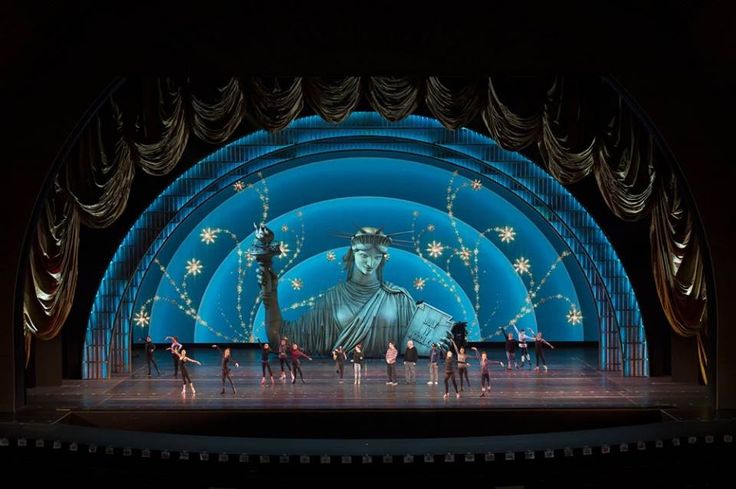 A three-story tall statue of liberty puppet – controlled by a team of puppeteers and voiced by Whoopi Goldberg. (Actors for scale.)

The puppets were a big feature of the show, and an element that always got a great response – especially on the days we had school shows.  The Statue of Liberty puppet was the only one controlled with remotes from off stage.  The others were controlled from the inside, with a series of gears and pulleys and bicycle pumps, by teams of puppeteers.

When I was hired, the show was already in previews, so the clock for opening night was ticking loudly. The show’s directors decided to add some circus spectacle last minute and hired 10 additional cast members with specialty skills. I was one of these late hires, as was Angela Butch (circus performer & founder of the Muse NYC) and a number of tumblers and dancers. The male ensemble dressing room was already packed to the brim, so they put a handful of us in a converted conference room. That’s the first time the a Rockettes show has been so large that they’ve run out of dressing room space!

My track was added to the show too late in the creation stage to be included in any of the promotional videos, but I can describe it in two words and a short video: bagel juggling.

In the opening song of the show, the protagonist, Bernie, sings a love song about New York City. “I love New York!” he declares, “The noise, the crowds, the energy. But, the mornings always mean the most to me…” and goes on to talk about his love for New York bagels and coffee. At that moment, I juggle a stack of bagels, weaving through the set of Grand Central Station, and freezing as I catch a high throw, in time with the music.

I worked with Radio City’s props team on a hybrid bagel/beanbag juggling prop. The first several shows, I juggled the genuine artifact. Their inconsistencies in shape and weight, not to mention a light design that was created for- and by dancers who didn’t need to track objects in the air on stage, offered an interesting challenge. We settled on a flat beanbag, stitched in the center, and airbrushed to give the impression of extra depth and shine. All said and done, these weighed about half a pound each. 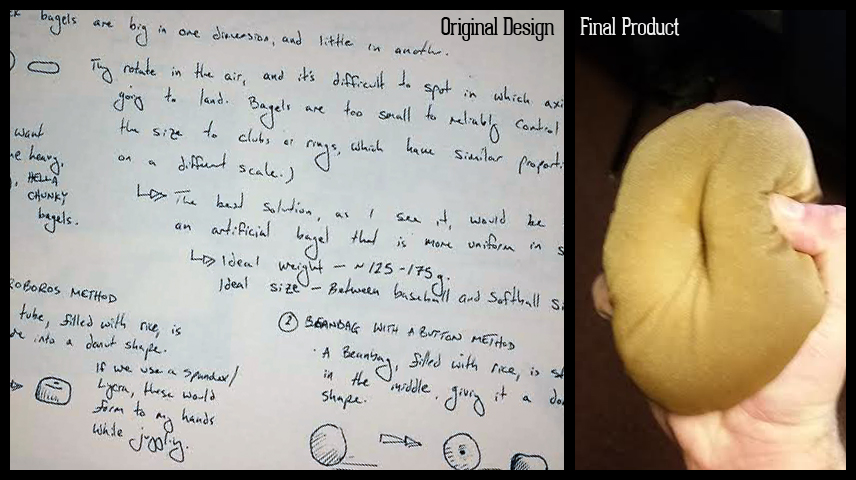 My other role in the show was juggling torches in the park as joggers and roller bladers and hotdog vendors carted by.  I had to run like mad to get off stage at the end of the scene, as the sky opened up and rain started pouring all over the stage (and as thirty-six raincoat-clad tapdancing dancers rushed on stage!)

The main feature of the show was, of course, the world-famous Rockettes precision dance troupe. This team is composed of women from all across the United States. Auditions for the company are an open call, meaning that anyone can show up and try out for the team. This draws around one-thousand dancers each year, all vyying for a handful of open spots in the dance company. The audition lasts two days, and includes jazz, tap, modern, ballet, and ballroom combinations. 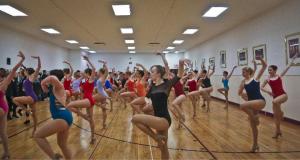 Dancers are measured when they audition for the company. If they’re not between 5’6″ and 5’10.5″, you’re not allowed to enter the rehearsal hall to audition. This is serious business, too – barefoot (not even socks) and a pencil through the hair to determine your true stature. — That’s a big range, though – Rockettes range 4.5″ in height! In the kicklines, though, they put the tallest girls in the middle and shorter ones on the outside. Since the girls all do their “personality kicks” (that’s what the group calls their trademark eye-level kicks,) it creates a nice optical illusion that makes it look like the dancers stand at the same height and kick to a uniform line.  True as that may be, it sure looks laser-perfect! 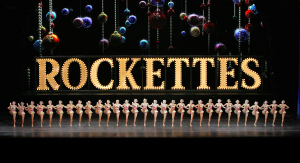 Another bit of stage magic is their hair – the Rockettes are a team with matching, back-length ponytails, and have been that way for a long time… but only some of the dancers actually have long hair. The dancers are assigned half-wigs are matched to their natural hair color exactly, and meticulously maintained by a crew of hair technicians (yep, that’s a thing!) at hair stations across backstage areas. Even if you’ve already got long hair, it’s tied in a bun with a prosthetic ponytail attached.

The show is run by a giant crew – one that outnumbers the massive 70+ artistic team.  Throughout my time there, I interacted with the stage managers, props team, stagehands, elevator operators, fire marshals, dressers, and all kinds of other technicians.  One of the most labor intensive transitions in the show was for the transition from the “Singing in the Rain” scene into the “Times Square” scene.  Here, the splashback from thousands of gallons of water had to be mopped from the stage (most went into a splashpan, but the stage was still wet!), twenty-something cast members had to get into elaborate costumes quickly (including some giant, body-swallowing mascot outfits,) all of the elevators went down, and a number of props had to be set.

One of my castmates shot and uploaded a backstage video of the transition, which you can see below.  (The video included the following text: “Disclaimer: This was shot on an iPhone 4 from inside a Paddington Bear suit. Also, no Penguins were hurt in the making of this video.”)

All said and done, this contract I…

– Changed clothes 656 times backstage (not counting changing into suits and tuxedos for after parties!)

– Climbed 48 flights of stairs daily (my calves have never looked so good!)

All in all, it was a lot of work, but a terrific contract.  I really hope to work at Radio City again next year…  We’ll see what the plans are for the 2016 Spring Spectacular!