When you hire an act, the show is just one part of the process.

Sometimes when I’m hired to perform my show for an event, I’m asked why I charge a flat day rate instead of billing for an hour of my time. If variety entertainers charged an hourly rate for their work, no-one would be able to afford their work!

Here’s a little graphic that should help explain: 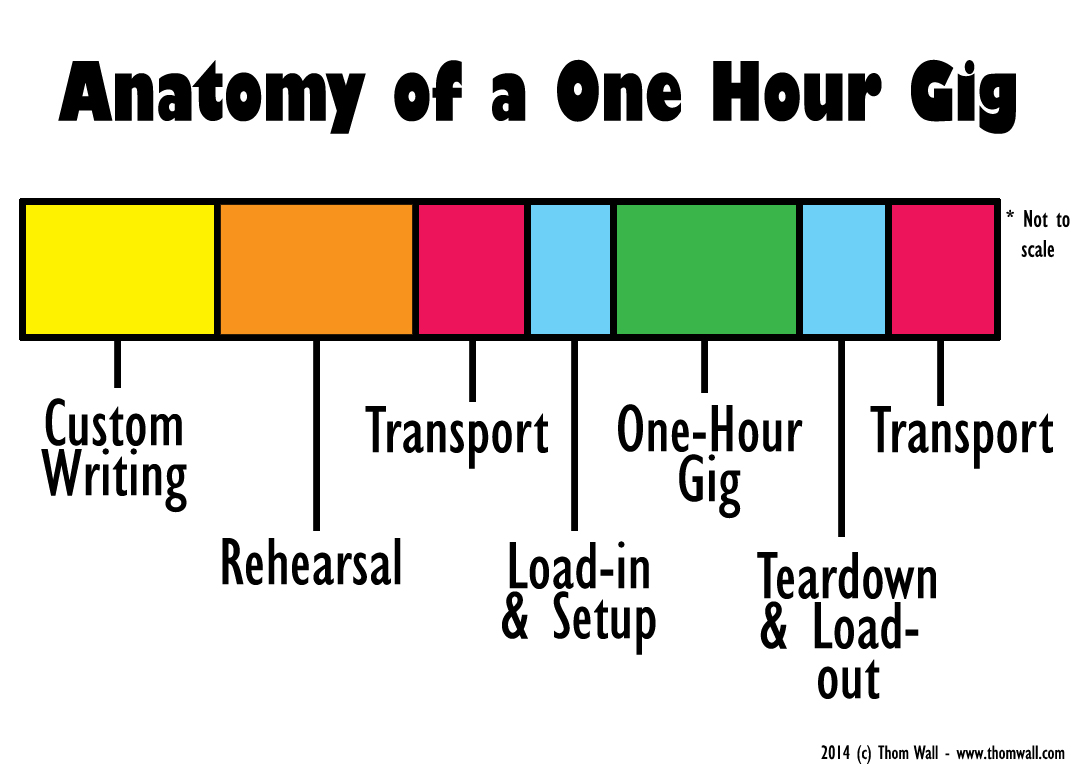 Writing – To ensure the best show possible, it’s important to customize your material to the audience. Just as the host of a dinner party will addjust the menu to their guests’ taste, a skilled entertainer will modify his material to best resonate with their audience.

This step takes research, writing, and a few hours of work.

Rehearsal – In order to execute a show cleanly, you’ve got to practice! A good variety performer will spend a few hours every day in the studio to polish his routines and work on new material. If you want your juggler to balance a wineglass on the edge of a knife he’s holding between his teeth – then skip rope while maintaining the balance – he’ll need to dedicate some time a few days before the show.

I often learn new tricks- or even write entirely new acts- for clients based on their needs. As you can imagine, these numbers can take several weeks to get stage-ready.

Transport – Depending on where your event is being held, transport can be more than half a day’s work! Most entertainers won’t charge you for time spent in the car, but do expect to pay their expenses along the way when you’re bringing in a performer from out of town. The 2014 federal reimbursement rate is $0.56 per mile driven – a number that accounts for gas, maintenance, and the car’s depreciation (Source: http://www.irs.gov/2014-Standard-Mileage-Rates-for-Business,-Medical-and-Moving-Announced).

Setup & Teardown – Even a relatively lightweight show can take an hour or two to set up, tech, and warm up. This can take some shows longer, depending on their size and technical requirements. I generally ask to have access to the venue two hours before curtain – an hour to set up my things and check my microphone, then another hour to warm up the tricks in my show.

…of course, this breakdown doesn’t include the amount of time and dedication it takes to learn the skills performed on stage! A dedicated variety performer will spend thousands of hours practicing across many years before he even considers going on stage professionally.