This past May, I was approached by Cirque du Soleil. They were interested if I might learn and perform Greg Kennedy’s “Conic” juggling act in Vancouver, BC and Auckland, New Zealand. Greg was leaving the show, and the permanent replacement they’d found was recently injured, so they needed a juggler to temporarily to fill the spot. What an opportunity! I jumped at it.

For those of you who aren’t familiar, “Conic” is a juggling act inside of a giant plexiglass cone. Balls are rolled along the surface, orbit the juggler’s body in spirals, and are caught and redirected by the juggler in an organized chaos.  It’s a totally unique juggling apparatus, and it’s not particularly intuitive. You can see a video of Greg in the cone here:

(Recognize the video? It went viral several years ago and was later featured in a credit card commercial that played all over the world.)

This act is featured in Soleil’s show Totem, which chronicles the evolution of man and the pursuits of mankind.  Greg played the “scientist” character, and the cone is dressed up to look like a steampunk test tube time machine (a description that maybe only makes sense when you’ve seen the show  – you can see a clip in this trailer, though!  Watch closely at 0:34.)

It’s always a bit of a mental puzzle to learn someone else’s choreography – decisions that make sense to one performer might not always make sense to another. It’s difficult enough when you’re learning a three ball juggling sequence in the air, but the cone act is mostly five balls – with over a dozen patterns, transitions, and changes set to music. It’s also done in the dark, with LED balls glaring against the glass all around you.

The artistic staff had requested that Greg’s replacement be given six months of training to rehearse the act until it was show ready. Between the original replacement’s injury and my own travel schedule, we only had two months to get the act up to standards. Not to worry, Greg had a plan!

Greg Kennedy isn’t just a juggler – he’s also an engineer. That worldview can be seen in his unique work as a juggler (Think the cone is different? You should see some of his other stuff!) – and also in his training regimen. When I showed up to the tent for my first training in Portland, Oregon, I was introduced to the spreadsheet. 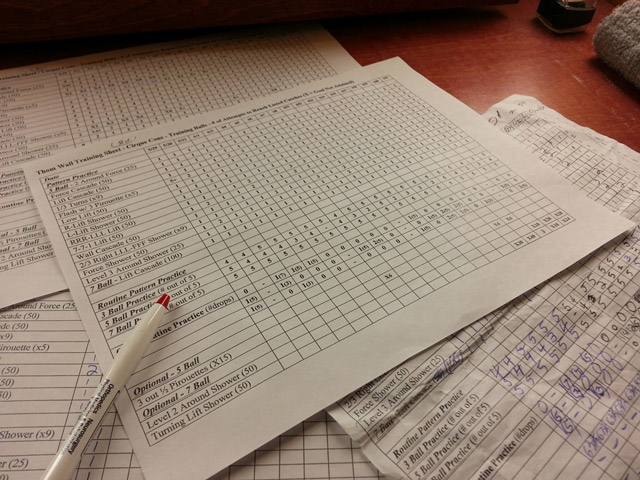 The spreadsheet is a way to monitor your progress, giving you a cold, unfeeling look at all of your mistakes. You hop in the cone, have a minute to warm up, then chart the number of attempts it takes you to get fifty catches of a given pattern. You drill a pattern until you get your long run, then you move on to the next one. When I first started, the sheet took me over an hour to fill out. Tired and sweaty, I’d climb out of the cone with a sheet covered in 7- 8- 15- attempt runs. Depressing. Over the course of two months, though, the numbers have steadily improved – getting smaller and smaller until recently, when the chart blossomed into a field of 1s.

Today marks my first show with Cirque du Soleil, and I feel prepared for the job. I’ve never trained an act so methodically before (not even for my graduation act from circus school!), and seeing my progress quantifiably improve gives me a new confidence with this apparatus and in my own abilities as a juggler. 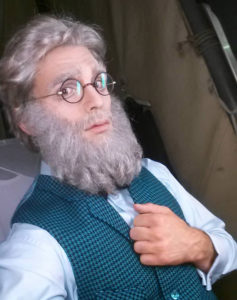 Writing “The ‘Dinner and a Show’ Show”
Scroll to top