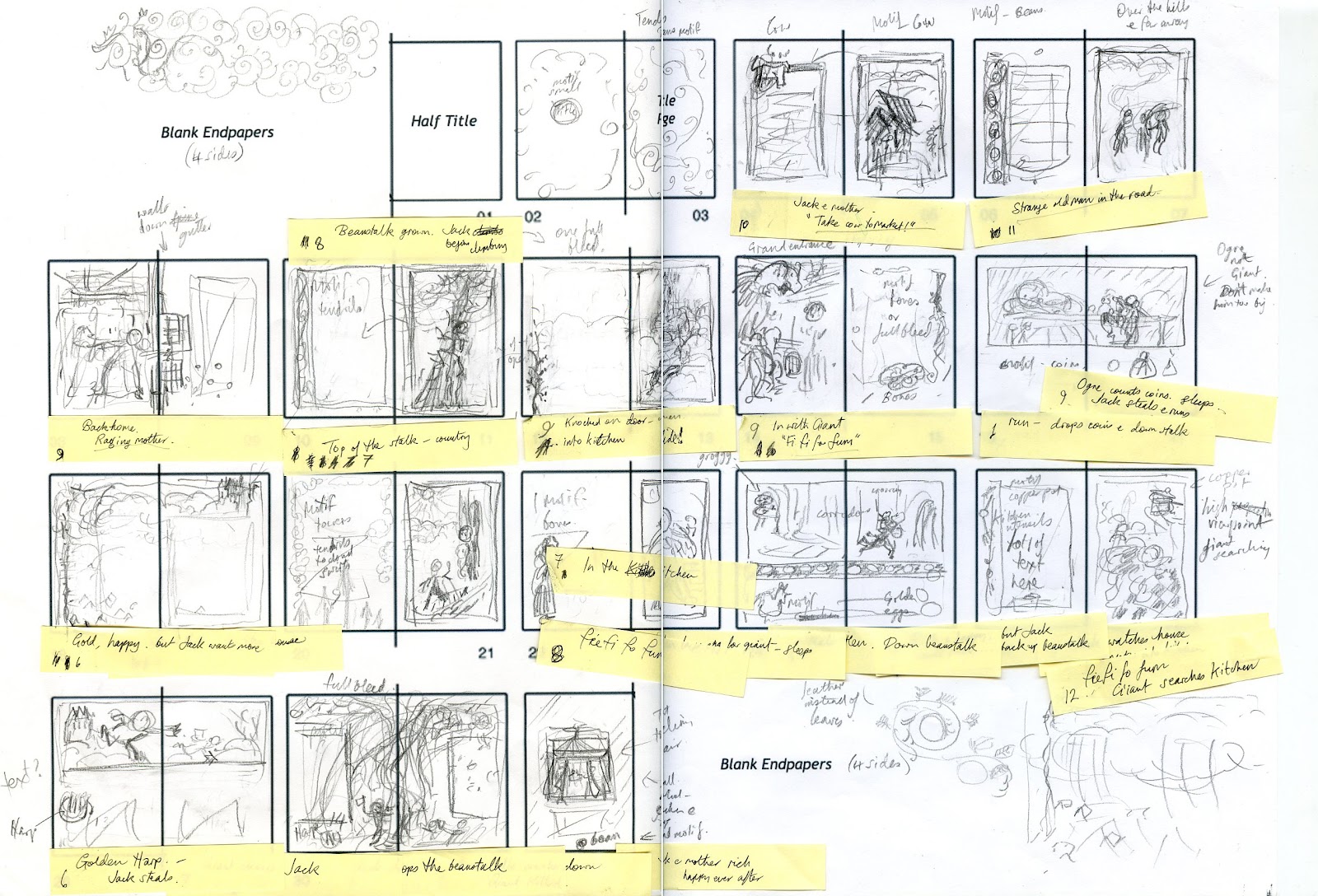 Layout for John Shelley’s picturebook “Jack and the Beanstalk” via: http://www.wordsandpics.org/2013/08/picture-book-basics-sketches-and-layout.html

The “Storybook Method” is a way of devising a longer narrative arc for a routine or stage show.  This is a method that I first used with Gabrielle Sinclair, when we wrote the play “Joan and the Gentleman Juggler: A Wonder-Tale, as told by the Ghost of L. Frank Baum.” Benjamin Domask and I used this method in the early stages of writing The “Dinner and a Show” Show, too! (You can see an article about that process here.)

According to Dan Holzman of the Raspyni Brothers, an audience member must be able to explain the stunt he saw in one or two sentences after seeing the show. “The juggler juggled apples and ate them” is a fine example of an easy-to-understand (albeit overused and underexplored!) trick that follows this rule.  How can we extend this attitude towards a narrative storyline?  The “Storybook Method” is our answer, friends!

This method insists that a full theatrical juggling show should follow an internal logic.  In doing so, an audience would be able to explain the plot’s individual beats to friends and strangers alike.  It’s called the “Storybook Method” because it follows a formula that is similar to the structure and layout of a children’s storybook.

A children’s book is essentially a stripped-down novel, that uses very clear imagery to describe very clear actions. In these books, “…plot is easy to see – it is the something different that happens on each page… for a picture-book plot to work, something different must happen in each picture. But that something needn’t be very different – a dramatic change in a character’s facial expression may be sufficient in some instances.” (Bethe Amoss & Eric Suben) 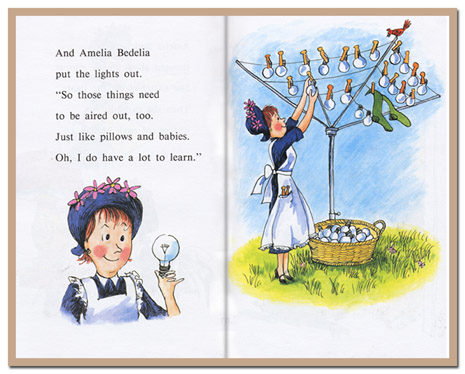 In this exercise, you create a list of hypothetical titles or captions for pages in a storybook. In a children’s story, each page drives the plot forward by presenting some kind of conflict. What problem is being solved on each page?

These captions are to be created in a vacuum, where the captions or pictures don’t have to be narratively related. (If you’re writing a show with a theme, though, it certainly helps to stick to that theme!) If you’re stuck for a place to begin, think about the trope in Victorian English writing. Oftentimes, chapters would simply be assigned a number. Underneath the number, though, would be a summary of the chapter starting with “In which…” (Example: “Chapter 18: In which our hero bakes a cassarole.”)

When Benjamin and I were devising The “Dinner and a Show” Show, we came up with a laundry list of hypothetical chapter titles. Some of these made it into the show, many didn’t. You can read a selection of these in my post called “Writing the Dinner and a Show Show, we made some interesting discoveries about the show as we rearranged these chapter titles. Notice how each chapter title in our prelimiary list could also serve as the premise for an entire 5-8 minute juggling act. That’s no accident!

When I was writing my mouthstick act, though, the chapter titles represented smaller tricks or moments. Here’s a sampling of chapter titles from my preliminary notebook for that routine:

After you create a list of 20-30 of these titles, arrange them in different ways. How might you get from one place to another? How might some of these be related? Remember to approach this exercise without judgement – every situation should be explored, whether or not you think it’s “good” or “bad.” You’ll often be surprised at how strong some choices are, despite what you may have thought at the beginning.

In the second exercise, you must create 3 new lists from the master list you created in Exercise #1. These 3 lists don’t have to be particularly long – just long enough to have some kind of narrative flow. This exercise is most helpful for full shows rather than short acts, both it still has value for both.

Look at the three lists and see if you can find an attitude or theme that fits them. Is this a hero’s story? Is it one giant joke? Is it entirely episodic? How would you play each one of these? If you took one of these lists to the studio, how might you flesh them out?

These exercises don’t exist to produce a fleshed out, theatre-ready show. These exercises serve to get you to stop thinking about tricks and raw skill, and instead focus on finding easily-digestible moments and inventing ways for them to relate to one another.

These narrative moments can be further workshopped with the image-based “Postcard Method” to help discover interesting stage compositions.