I graduated from Drexel University in 2015 with a Masters’ of Science in Nonprofit Arts Administration… and to my surprise, the university named me as one of their “40 Under 40” this year!

This recognition was awarded to me for my work with the International Jugglers’ Association, educating the public on the history of juggling, and pro-bono consulting with a variety of circus companies. It’s a huge honor, and I’m thrilled (and, honestly, a little surprised!) that they’ve put me on a pedestal along with experts in nuclear security and counselors for US senators.  Is circus really that important?  Looks that way! 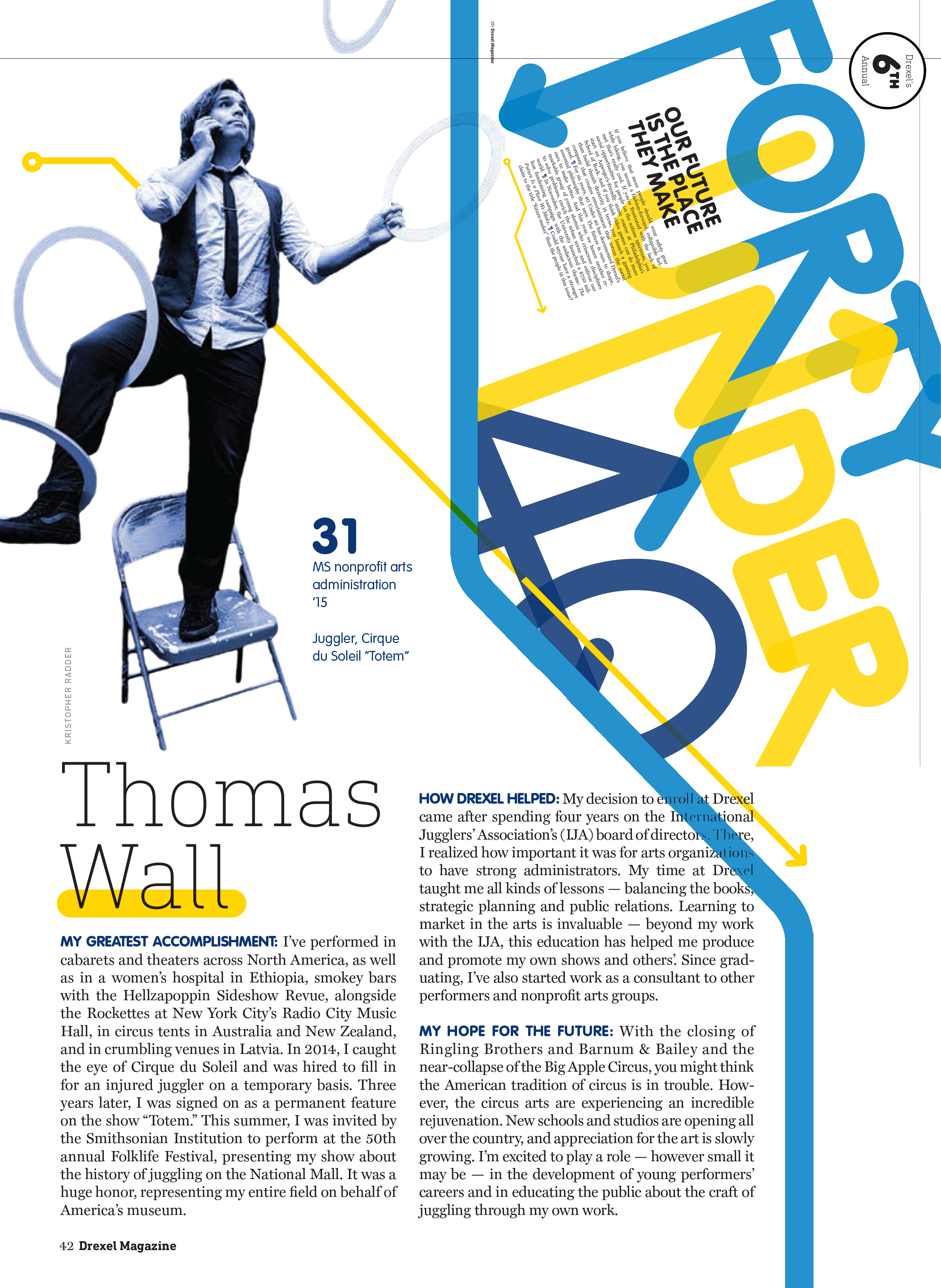 MY GREATEST ACCOMPLISHMENT: I’ve performed in cabarets and theaters across North America, as well as in a women’s hospital in Ethiopia, smokey bars with the Hellzapoppin Sideshow Revue, alongside the Rockettes at New York City’s Radio City Music Hall, in circus tents in Australia and New Zealand, and in crumbling venues in Latvia. In 2014, I caught the eye of Cirque du Soleil and was hired to fill in for an injured juggler on a temporary basis. Three years later, I was signed on as a permanent feature on the show “Totem.” This summer, I was invited by the Smithsonian Institution to perform at the 50th annual Folklife Festival, presenting my show about the history of juggling on the National Mall. It was a huge honor, representing my entire field on behalf of America’s museum.

HOW DREXEL HELPED: My decision to enroll at Drexel came after spending four years on the International Jugglers’ Association’s (IJA) board of directors. There, I realized how important it was for arts organizations to have strong administrators. My time at Drexel taught me all kinds of lessons — balancing the books, strategic planning and public relations. Learning to market in the arts is invaluable — beyond my work with the IJA, this education has helped me produce and promote my own shows and others’. Since graduating, I’ve also started work as a consultant to other performers and nonprofit arts groups.

MY HOPE FOR THE FUTURE: With the closing of Ringling Brothers and Barnum & Bailey and the near-collapse of the Big Apple Circus, you might think the American tradition of circus is in trouble. However, the circus arts are experiencing an incredible rejuvenation. New schools and studios are opening all over the country, and appreciation for the art is slowly growing. I’m excited to play a role — however small it may be — in the development of young performers’ careers and in educating the public about the craft of juggling through my own work.

Two Minutes at the Monocle

What Scientists Have to Say About Juggling – Free eBook!
Scroll to top