The fifth annual Zelta Karlis circus festival took place this past January 23–26, in Riga, Latvia. The festival is Latvia’s national circus competition and is hosted by the state’s official circus organization, Rigas Cirks. Rigas Cirks has been in continuous operation since 1888, in the red-domed circus building on one of Latvia’s main streets just outside of the old city.

I was invited to compete in the festival’s 2015 edition with my mouthstick number and to present my contemporary ball juggling number in the welcome show. I was not the only American in attendance, however; Nicole Burgio (static trapeze) and Lauren Feldman and Megan Gendell (double trapeze) were also invited to compete. All four of us are graduates of theNew England Center for Circus Arts‘ Professional Track program, and this was the second year Americans have taken part in the competition (Alyssa Morar, also a NECCA graduate, competed in the 2014 edition of the festival with a silks routine.) 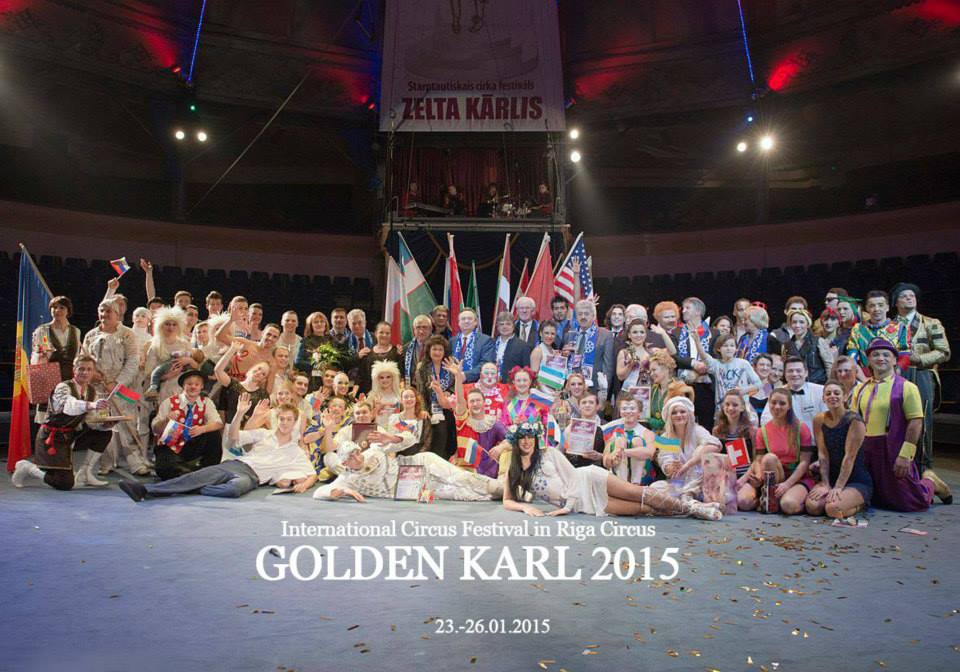 The festival has an extremely traditional flavor (“extremely” might even be an understatement here—it’s the kind of traditional circus festival you might expect to find in post-soviet Europe), but the acceptance committee prides itself on accepting a few contemporary circus acts each year. In this way, they educate Latvian audiences about the state of the circus world beyond the former Soviet Union. Nicole’s static trapeze act fell into this category, as did Megan and Lauren’s playful double trapeze number. Because it is such a traditional circus juggling prop, my mouthstick was familiar the the audience, but my act relies on character as much as on spectacle, so perhaps presenting it gave the committee a comfortable way to show similarities between traditional and contemporary circus.

I landed in Riga the day before the competitions and was picked up by a quiet, bearded man holding a sign with the circus’ logo. We waited a while for two of the competition’s judges to arrive on a flight from Azerbaijan and for an aerial cube act to arrive from the Italian part of Switzerland. Once we were all gathered, we spoke in a pidgin of Italian, Spanish, English, and German on the drive to the circus building and arrived just in time for an early tech rehearsal and an early night’s sleep for the long week ahead. 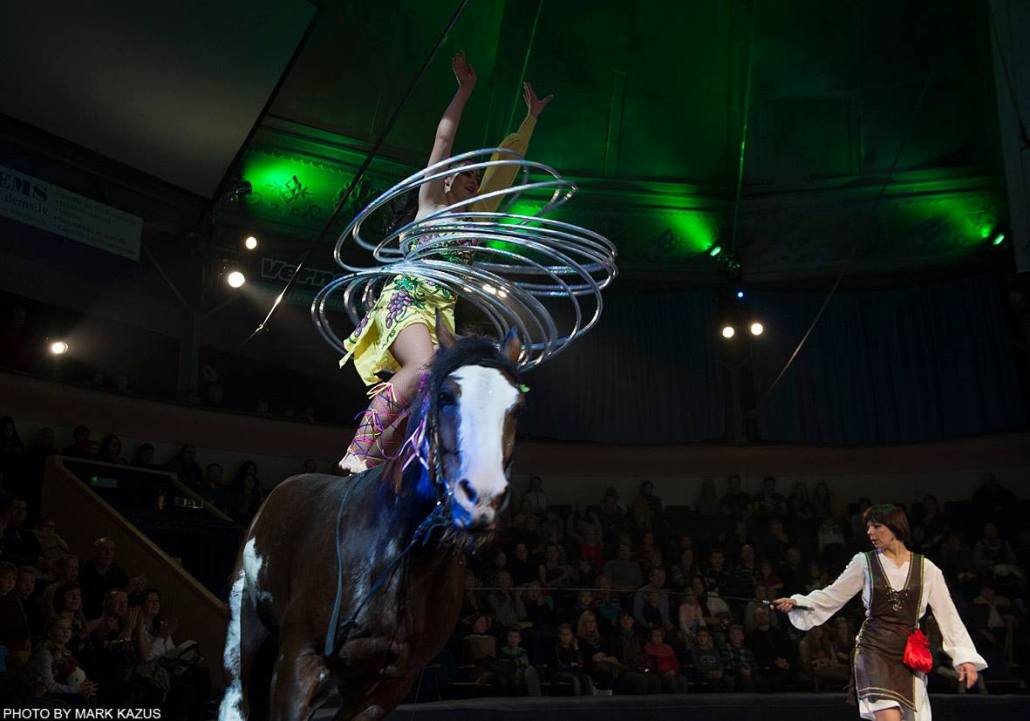 There were many experiences that stood out—and continue to stand out—as particularly remarkable throughout the festival. Though the organization has existed for a long time, it’s a relatively new circus festival and one that’s still figuring out the kinks of a hosting an event for multi-lingual participants. The majority of the communications were given in Latvian, and when a translation was offered, it was usually in Russian. This combination was suitable for a majority of those in attendance, but it left all of the Americans, the Germans, and the lone Mexican in the linguistic dark. We relied heavily on Sergey, a celebrated animal trainer, for loose interpretations. This was problematic during the shows (listen closely for something that sounds like your name, then run into the ring!) as well as for the final awards presentation, which was conducted completely in Latvian. In storage closets in the circus buidling, there were rows of unused “Caution! Predators” signs made to be hung on closed doors. Though there were no bear acts this year, there were last year, and several foreign performers couldn’t read the Latvian cautioning them about the contents of what otherwise might have been the perfect room to warm up in!

As a performer, one of the most remarkable aspects of the festvival was the famous “Soviet clap”; crowds applaud in measured unison instead of in the free-for-all applause we’re used to in the West. As a comedy juggler, I was also thrown by cultural differences; all of the laughter and applause moments in my routines were different in Riga than they would be in, say, Saint Louis. In a later conversation with the judges, one remarked that: “the people here do not understand subtlety. You have to work in symbols, not emotion.” I re-blocked my act the best I could from the first night to the second, but you can only do so much! 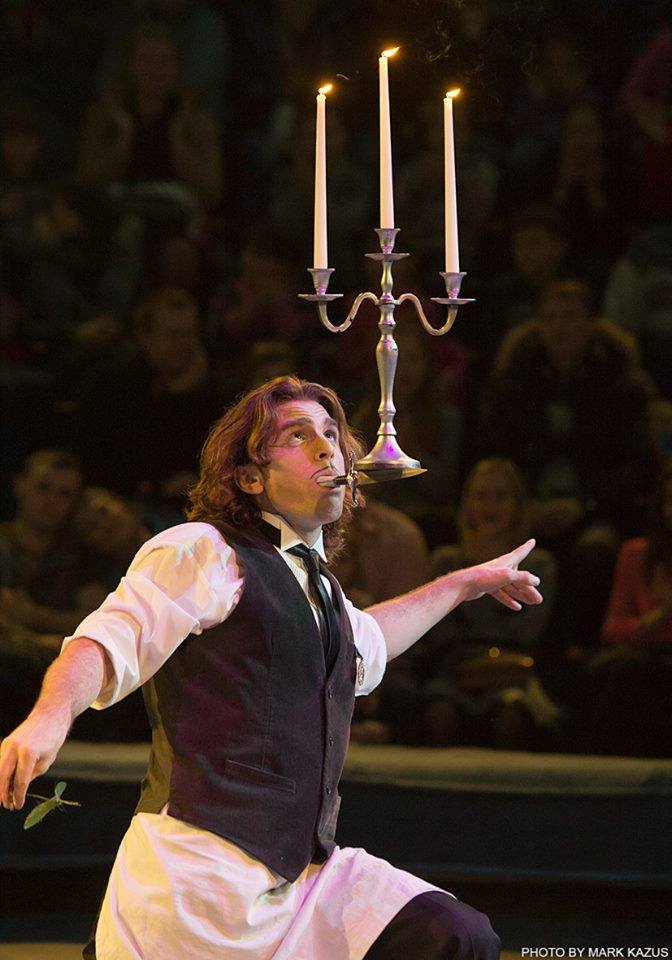 Of the acts I was able to see in the competitions, a handful stay in my mind. Maxim Helmut, of the Moscow Circus School, presented a gorgeous contemporary rope routine. Giovanni Aguilar Paredes of Mexico City presented a traditional juggling number with his own take on the classic “perch” bouncing act, where a ball is bounced from platform to platform, up and up, until it lands in a basket. Giovanni’s perch was mounted on his shoulder, and the basket was fifteen feet in the air, nicely filling the circus ring. (American jugglers might recognize Dan Holzman’s “bounce pole” routine as a miniaturized version of this act!) Alena Chukhnova of Belarus presented a silks act in which she transformed into a crow, jolting and scratching her way to the ceiling. The clown trio headed by Tamila Petroshchuk of the Ukraine was a real highlight as well. She played the trainer to two giant tortioises and an old maid trying to seduce an audience member. Petroshchuk selected her “lover” in a novel way, by having a spotlight train itself on a man in the audience early on, then passing a letter up the rows of the audience to the man. Liv Knoche and Tobias Willasch, two Germans who trained in the Netherlands, presented a lovely double trapeze act that explored love and fear in relationships. 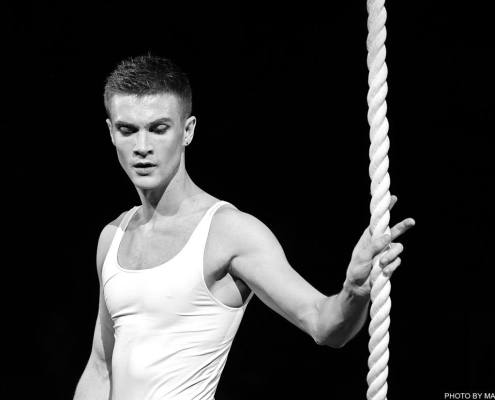 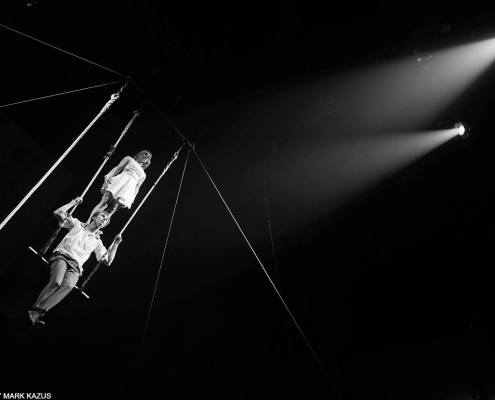 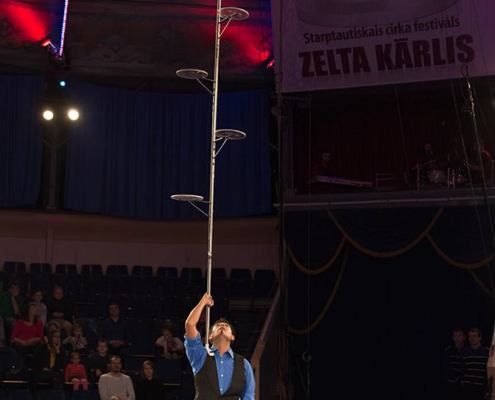 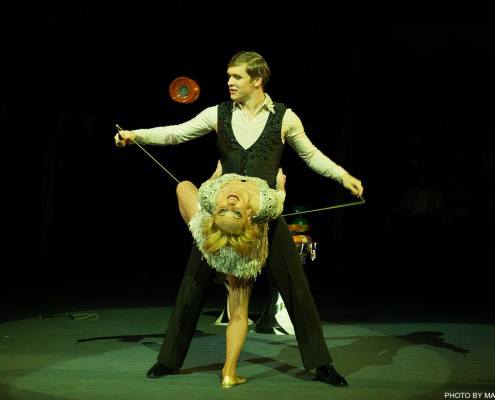 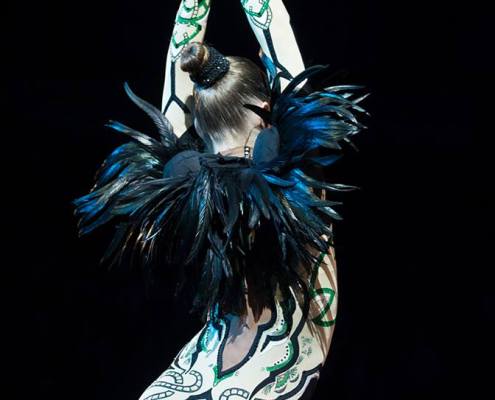 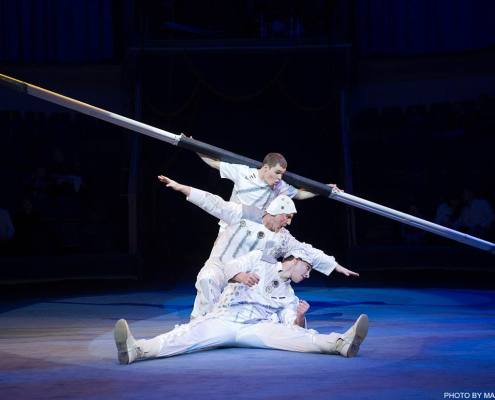 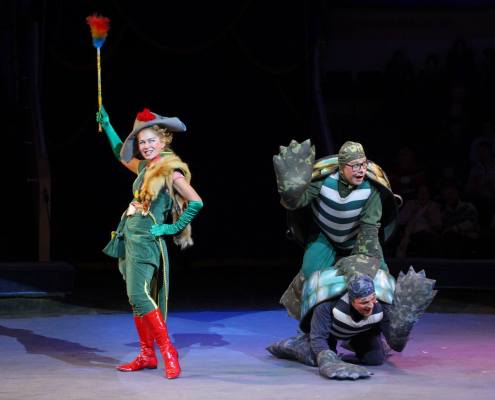 You might notice that the acts I mention here are either contemporary or juggling, the two ways I know to understand circus. These acts were among the least decorated by the jury in the end. The Grand Prize was awarded to the Russian bar act of Igor Stynka, Raman Kavalchuk, and Roman Malykhin, a group of clowns who try to get revenge on a bird that defecates on one of the porters. They accomplished this through a series of pantomimes that represented swimming, walking on the moon, and flying in an airplane, as well as jumping and turning saltos on the Russian bar.  Ina Sopova and Kristaps Pavlovs were awarded a medal for their quick-change act, and Anastasiya Yeukhimenka won several awards for her hula hoop act on horseback. Ivan Romanov and Tatiana Romanova also won a medal for their acrobatic diabolo act, in which Tatiana throws her diabolo high, gets piched into a backflip, lands on Ivan’s shoulders, and catches the diabolo. She then threw the diabolo high again, turned a front tuck, and landed back on his shoulders, catching the diabolo. A very clean act.

Comparing these numbers to those that do well at other circus festivals, or those that seem to have success in the US, a few best practices come to mind. If you’re considering applying to Riga next year, perhaps these notes will help you fashion an award-winning routine:

I am grateful for this opportunity, and I hope my experience helps other performers know what to expect.

Two Months with the Rockettes
Scroll to top