“Thom, how do you make a good routine?”

That’s one of the questions I’m often asked when I’m coaching at NECCA.

Unfortunately for the students who ask, there’s no one clear way.  “Interesting” is a difficult — if not impossible — attribute to measure.  There are, however, different ways to look at routines and pick apart different aspects of their presentation.  Here’s one of my favorite ways to dissect choreography: 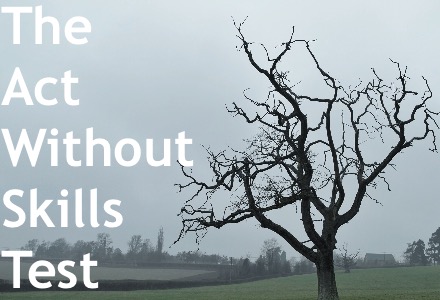 The Act without Skills Test

Variety performance inherently relies  on unique skills and props to create an act.  Relying on skills or props alone can sometimes be a crutch to performers – the “Act without Props Test” requires that the performer run through their act’s choreography without the skills or props that they rely on.

The idea is simple – if an act’s choreography can hold an audience’s interest without any of the skills it was written with, won’t it be that much stronger when the choreography is done with the skills as well?  Think of it as a melody being hummed, compared to a melody being performed by a full orchestra.  If it’s strong in the simplest form, it should be strong in its fully rendered form.  By stripping an act down, we are forced to focus on the tempo, the character, and a host of other elements often overlooked in favor of the tricks and skills.

Let’s use juggling as an example.  A young juggler approaches his director, asking why his routine isn’t very strong.  It is extremely technical, well polished, and captures the attention of jugglers all over.  Other audiences, however, haven’t been as interested.

If you like juggling for the sake of juggling, then this act was probably great!  If you’re like the rest of the world, you probably looked at the person for cues about how he was feeling, what he was thinking, or why he was doing it at all.

This exercise strips the juggler of his equipment, and has him “mark” the act in real time with his music.  (He’ll probably protest.  Lock his equipment in the closet until he agrees to do it!)

Watch for movement around the stage, for facial expressions, for pacing and tempo within the body.  How does the performer breathe on stage?  Is the act interesting to watch when the “meat” of the act isn’t there?

The juggler in our example spent minutes at a time standing center stage, facing the audience, in a fully upright position.  This stance was punctuated with short sprints to his table in the back, where he picked up new equipment before returning to his starting position.  Not a very interesting act without the technique.

So, what can we do to make it a little more interesting to watch?

The juggler should reblock his routine to hit more places around the stage.  If you’re having a hard time figuring out what to do where, pick an arbitrary shape and see what happens. I like to have jugglers working with this exercise to pick a letter of the alphabet, then trace that out during one of their sequences.  We’ll run that arbitrary blocking a few times, then add the props back in.  We record it, watch it, and pick through it to see if something jumps out as interesting to watch.  We keep the new part, and keep playing with the rest of the sequence.  When you devise material this way, it’s easier to step back and look at the altered routine with a sense of equanymity – noone’s feelings get hurt when you cut material.

How about pacing?  In our example, the juggler did tricks one after another – back to back to back to back.  The juggler should look at their tempo.  Is it so even that they’re unwittingly putting their audience to sleep?  I like to have students pick a series of tempo-related descriptors.  “Molasses-slow!” “Stop-and-Go!” “As fast a possible, then stop!”  Once they come up with a few different words, they’re tasked with taking a sequence and finding a home for each one of them.  A standard pattern is changed with some stops and starts, a dash to pick up a ball on the floor is turned into a slow-motion walk. — and all of these changes help make the core of the choreography more interesting.

This exercise certainly doesn’t pretend to be a cure-all for routines.  If you’re looking for a new perspective on your act, though, perhaps this will help you out.

Do you have an exercise you use to change things up?  Comment below!

A lot of folks messaged me after this post was published, asking how it might apply to aerial acts.  How can you mark through an act on a vertical apparatus, like silks or rope?  What about something like static trapeze?

Here’s a challenge for my aeralist friends:

Next time you rehearse, try doing it in the middle of a room, sitting on a bar stool.  Instead of the skills (climbing, dropping, suspended in a pose in the air,) what can you do to hold attention while isolated in one fixed point, like a stool?  You’ll have to play with emotional textures, viewpoints, movement, and other non-athletic aspects of performance.

The bottom line of it all is this – the skills themselves only represent a small portion of the act.  Lose the skills for a few rehearsals and focus on the rest.  You’ll come away with a much fuller piece as a result.

This week, I met with Philadelphia juggler, Andrew Scharff, to help him polish some acts.  We retooled  his cigar box and diabolo acts in anticipation for his upcoming contract on Celebrity Cruise’s ship Solstice, where he’s working for the first part of 2015.

We worked mostly on pushing and pulling the acts – making them more dynamic in their pacing, blocking on stage, and emotional appeal.  Towards the end of our first workshop, we started talking about act creation methods.  I put the work of the day in terms of The Postcard Method, The Storybook Method, and Fritz Grobe’s ABC/”Little Pieces of Shit” method (more on that later!)  He asked me if I’d heard about the Pixar Method.  I hadn’t!  Here’s what he was talking about:

In 2011, Pixar storyboard artist Emma Coats published a list of “story basics” – a series of writing guidelines she’d picked up from senior writers in her department.  Andrew was most excited about principle #4, a basic fill-in-the-blank writing prompt that allows for a strong narrative arc:

Storywriting 101, right?  You’ve got a main character, some exposition, an interrupting action that drives the plot, and a resolution.  It’s a bit formulaic (uh, because it’s a formula!), but it’s an interesting lens to look through.  Applying this technique to variety acts with this rubric would get you out of “juggler brain,” where you focus on doing hard stuff for the sake of doing hard stuff, and instead focus on doing tricks that are meaningful in some way.  This formula applies mostly to character-based, narrative acts, but could be used for more straight-variety pieces, too.

Let’s take this partner acrobatics act by my friends Lauren Breunig and Ryan Freeze as an example:

Once upon a time there was an old man and a nurse.

Every day, she would look after him.

One day, he stumbled around during his exercises.

Because of that, he and the nurse accidentally did some amazing tricks.

Because of that, he got too excited and needed his medication.

Because of that, he remembered what it was like to be young again.

Until finally it was time to go home.”

I know what you’re thinking!  “…great, Thom.  That’s a nice way to look at an existing act, forcing it to fit this Pixar thing.  That’s not useful, though – how can we create something using this idea?”

Here’s one way of reverse-engineering an act, using this formula as a starting point:

Take a stunt you want to turn into part of the act.  This could be a big meaty trick, a “Postcard Moment,” or any other thing that has some narrative or dramatic importance to it.  We’ll put this moment in one of the blanks in the “because of that” section.  For our purposes, let’s use the idea of juggling a slippery bar of soap.  (Everyone’s got a couple of soap tricks, right?  Old hat.)  Plugging that into the formula, we get this:

The next step is putting that in context.  What could lead to soap flying through the air?  In this soap case, maybe our character is washing dishes.  Why is he washing dishes?  Maybe he was out of clean dishes, and wanted to put some supper on the plate.

What’s the payoff here?  Can we find a relationship between the lunch and the soap?  Instead of having an extra, contrived prop in the act, wouldn’t it be nice if it all tied in together?  What if we had the character accidentally eat the bar of soap?  The character would have to be pretty absent-minded or distracted for him to accidentally make a soap sandwich.  How could we make that happen?

Is it perfect?  Nope!  Did we create the bones of an act that has a beginning, middle, and end that has a juggling stunt placed in context?  Absolutely.  One of the nice things about acts with a narrative structure is that there are lots of ways to add virtuosic skills, as well as clever ways to incorporate pretty “Postcard Moment“-style images.  Here are a few ideas off the top of my head that could be used to flesh this hypothetical “soap and sandwich” piece out.

– Bubbles coming out of the sink

– Stacking dishes very tall, not knocking them over – pretty images of towers of cups leaning over the sink

– Making a mess in the sink – water splashing over the countertop

Add some of these ideas, and pow! you’ve got a nice act that’s interesting to watch and easy to follow.

When thinking up ideas to flesh an act out, don’t censor yourself at first.  The important thing is generating lots of ideas to go over later.  After the thoughts are on paper, you can start picking through them to find related threads and see where the strongest ideas are.

Do you have any acts that follow this narrative arc?  How might this particular thought process help you with a project you’re working on?  I’d love to hear in the comments!